I escape the death house.

When I went in to leave off some food I would not be able to use before leaving Mexico in two days’ time, Helen was lying on her bed, bloody from breaking through her own skin, wet from urine, clutching Deborah, the young housekeeper recently brought in to help, with a relentless grip on her arm and thick braid. She was saying something in neither English nor Spanish over and over, not responsive to anyone.  An hour earlier I heard a solid five minutes of “no, no, no. . .”

It seems that Helen was going to die on this night, 30 October.  I had understood that her son Keith was on his way, coming last night, but family friend Pablo said that he had no valid passport, so will arrive with his wife on Friday 1 November instead. I would like to meet him, after our brief phone conversation in which he seemed to share a lot about Helen’s life with Agostino, his readiness for her death. He thanked me for what I have done, which is nothing aside from an email to strangers to ring an alarm that there has been a downturn.  I sent also the two photos I had taken of Helen, and the mention that I had wanted to write up notes about my conversations with her.

While I thought she was in the process of dying, I left for the sacred space of San Pablo (discovered while I was on a solo walk on March) to hear the music of Nybram, a musical group from Colombia.  I heard them in concert two nights earlier in another sacred library space, Biblioteca Henestrosa. 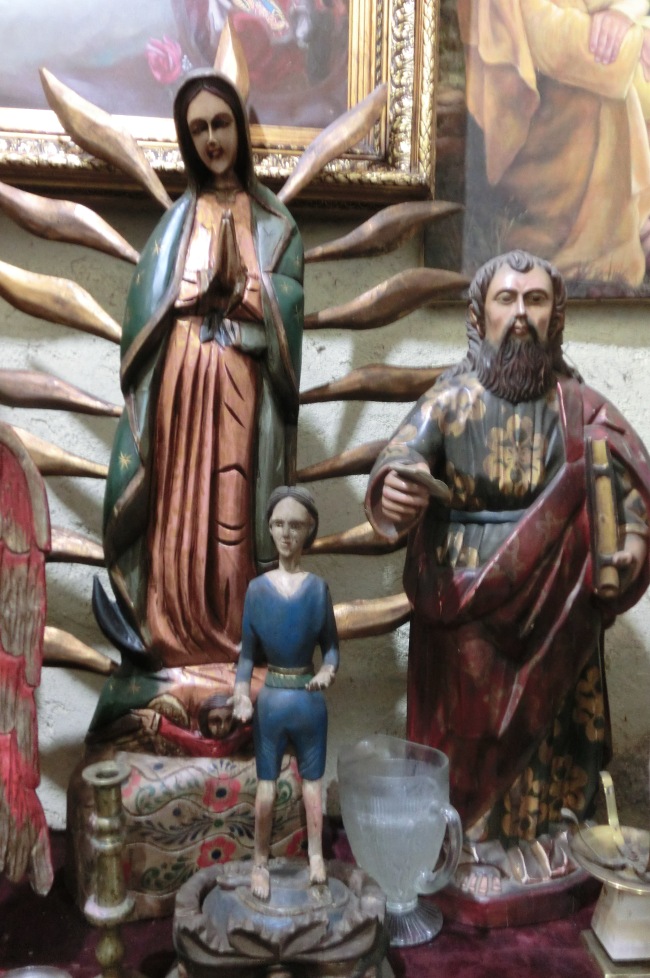 I have almost written some positive things about the Catholic Church here. Its buildings here in Oaxaca are ancient by US standards – 200 years old, some much more — generally open to the public for a sit-down, cool in the summer, warmish in the winter, with artwork ranging from the sublime to the ridiculous. Churches are state-owned and the flock of padres and sisters are not supposed to be on the streets in clerical garb.  But the spaces that seem “sacred” are libraries.

One big rich guy – the cousin of Carlos Slim — has attached his name and money to a foundation that funds the salvage and beautiful restoration of libraries, open to the public. In the case of the two I mentioned, Henestrosa and San Pablo, glorious open courtyards, chapels, and contain fountains and space for music, dance, lights, and books for reading, for adults and children.  On this night, chairs were arranged around the central fountains for the audience. The program was completely different from Tuesday’s, what I would call music associated now with Christmas, though not of this century:  Adeste fideles, late-16th-century melodies Greensleeves and Coventry Carol, the traditional Dona Nobis Pacem.

Nybram is a sextet of voices, cello, violin, mandolin/lute, flute and soprano saxophone, which I’m not sure I’ve seen or heard before, but the range of which seems identical to that of the violin and the human tenor voice, so that the toss-off from onto the other is understood by looking more than hearing. The primary vocalist of the group is Julian David Trujillo Moreno, and it is this voice that completely fills the space and pierces through whatever else I might have been thinking.

A gang of four unison chanters trouped through in medieval monk toggery, singing Latin texts a capella with a chiming bell while ascending the stone stairs to the balcony, then descending, echoing all the way, tapping into a modern sense of the romantic and sacred, pure. The sextet alternates or joins in.

If tonight I were Helen, writhing at the end of life, this voice, this perfect music, would keep me alive another hour or another day, lodged between here and somewhere else, painlessly sensate.

Apparently even God wants you to shut up already on the cell phone: “God is calling you, but not on your cellular phone.”

Posted on 31 October 2013 in idiots among us, Mexico, Roman Catholic Church, what NOT to say

Tagged enough is too much, Mexico, Oaxaca, Roman Catholic Church

Pope does something profoundly good.

Will there at last be something good to say about the Roman Catholic Church?

Posted on 23 October 2013 in could be worse, economics, idiots among us, in good news, Roman Catholic Church

Tagged enough is too much, making change, truth-telling