mourning a lapse of feminism in the rising generation

Who doesn’t like a party? Thanks so much for inviting me… oh. It’s a “shower.”

It’s a theme shower, I see, pre-feminist wave of the mid-20th century? The envelope is addressed to “Mrs.” me and I bristle; I just don’t see that in my circles. When phone solicitors ask if I am “Mrs.” Something, I know they don’t mean me and politely say that they must have someone else in mind and goodbye. Though my male partner is in fact the relative of the “bride,” you have invited only me, so it’s a double-X chromosome thing, huh? How retro, like my home phone, I guess.

Your tastefully printed invitation – style points there! — refers to the wedding couple as the “soon-to-be Hisnames” give by all those bridesmaids. I wonder if you would really use the phrase “tying the knot” in its original sense, that of a trial marriage. Probably not.  You mean a clichéd binding of hand, foot, mind and money.

I usually bathe alone. So without regret, I will not be attending your party. You won’t miss me.

living in a crafty world — glue-sticking together for reproductive rights

Today at the Supreme Court the ruckus was all about whether that nasty Obamacare tromps on the rights of corporations (non-humans) to deny preventive health-care, specifically in the form of drugs and devices that prevent pregnancy, to employees (humans) who happen to work there. A better solution would be to uncouple health insurance completely from employment and move to universal health-care coverage as many other countries have, and as the Affordable Care Act begins to do. Until then, here we are, where under the cover of religion, a “boss” can play doctor. 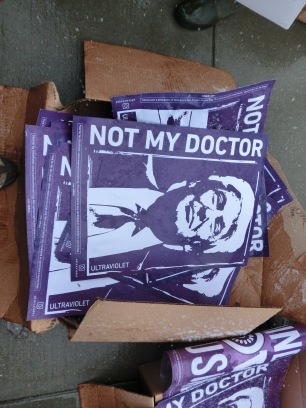 I happened to be with a “faith-based” group, singing liberation- and spiritual-type songs, and bearing signs suggesting that people — and corporations! — just mind their own business regarding the reproductive organs of others. We feel this way quite strongly, as a matter of intellectual conscience, which the Hobby Lobby craft store people must understand is at least as valid as strong feelings that come from the Bible, which does not mention IUDs at all, not even once.  As I walked past the long line of folks hoping to get inside to hear the opinion, two called out trying to shame me, but mostly the crowd gave the thumbs up and much more audible forms of support.

Here’s hope that Antonin Scalia will reread that thing he wrote about how it was ok to disallow use of peyote, because not every silly thing that people do can fall under the umbrella of protected religious behavior. People just gotta go with the program sometimes! Hunt down this story by searching with the words “Scalia” and “peyote,” and you will find many sources.

I find myself within this family that I have joined and the stuff that comes with it:  tsk-tsking about a family member who, alas, has become Christian, and what would the atheist parents say about that!; the family matriarch,  a retired Ivy-educated professional woman, whose every waking hour is dutifully prepping or cooking the next meal for her adult partner and other family members; my in-laws who after 30 years of marriage – the second for each of them – openly show affection; a “walk” in the woods that includes shears and shippers to make the trail as they go.

What the hell am I doing here?